You are here: Home / Cooking Notes / The Best Ways To Cook Chorizo Sausage

If you don’t know what to make for lunch today or what to serve your guests when they come over, we have the solution.

Today we will teach you how to cook chorizo sausage and prepare a tasty, savory and slightly spicy meal that will impress anyone who eats it. But, before we can get to that we must answer one crucial question first. 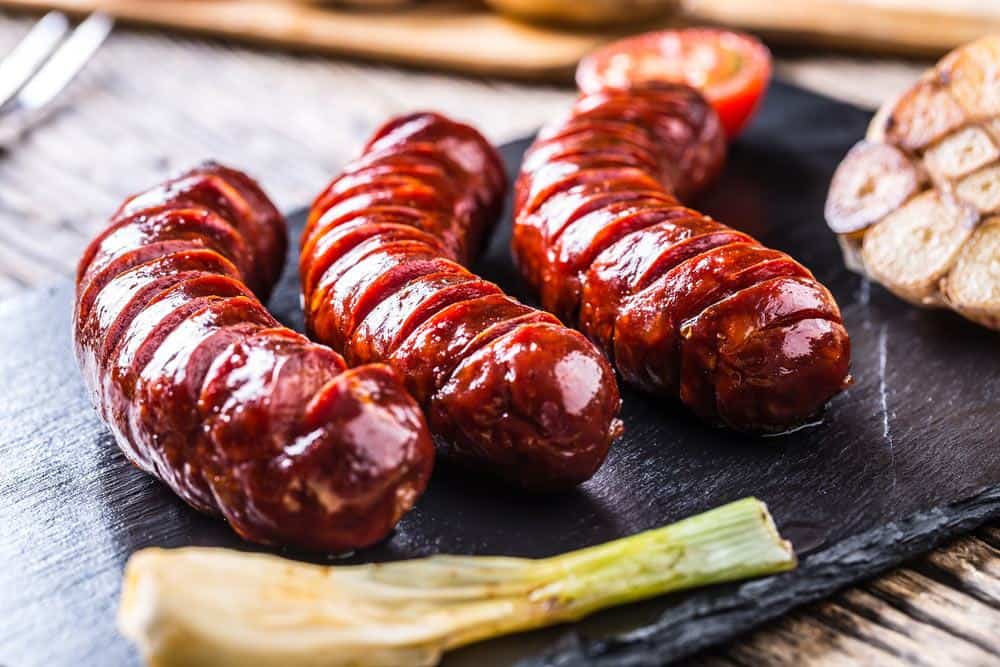 While some of you might be familiar with the chorizo, we are aware that most people aren’t. But don’t sweat – we’re about to explain everything you need to know.

Chorizo is a type of sausage that’s widely popular in Latin America and some European countries, primarily Spain and Portugal, though variants can be found all over the world. The sausage has a long and rich history, and there are many different takes on the core concept of the chorizo. We will talk about all these different variants, but first, we need to talk about something else.

The term chorizo or chouriço originated in Spain and Portugal, respectively, and there it used to refer to many different types of sausages made from pork.

The traditional recipe for making chorizo consisted of minced pork and various spices – mostly paprika – encased in a natural tube made from pig intestines. It could be fresh, thus requiring cooking, or more commonly fermented, smoked and cured, able to be eaten straight away.

What all these sausages had in common was a characteristic deep red color and spiciness which came from the type of peppers most commonly used when making the chorizo – the pimentón peppers, usually smoked and dried ones. Originally, these sausages didn’t use the peppers, but somewhere during the 18th century, they became a staple in chorizo production.

The main reason this type of sausage gained widespread popularity in the first place is that it was incredibly versatile. It could be eaten as an appetizer, put into soups or stews, fried, used to spice up a lot of different dry dishes and so on.

Because of this it also spread into Mexico and the entirety of South America with Spanish and Portuguese colonizers. It also remained incredibly popular to this day – almost half of the yearly sausage production in Spain consists of chorizo sausage.

People in the US, however, might be more familiar with the Mexican variant of the chorizo which differs significantly from the Spanish original. We’ll tell you all about that right now. 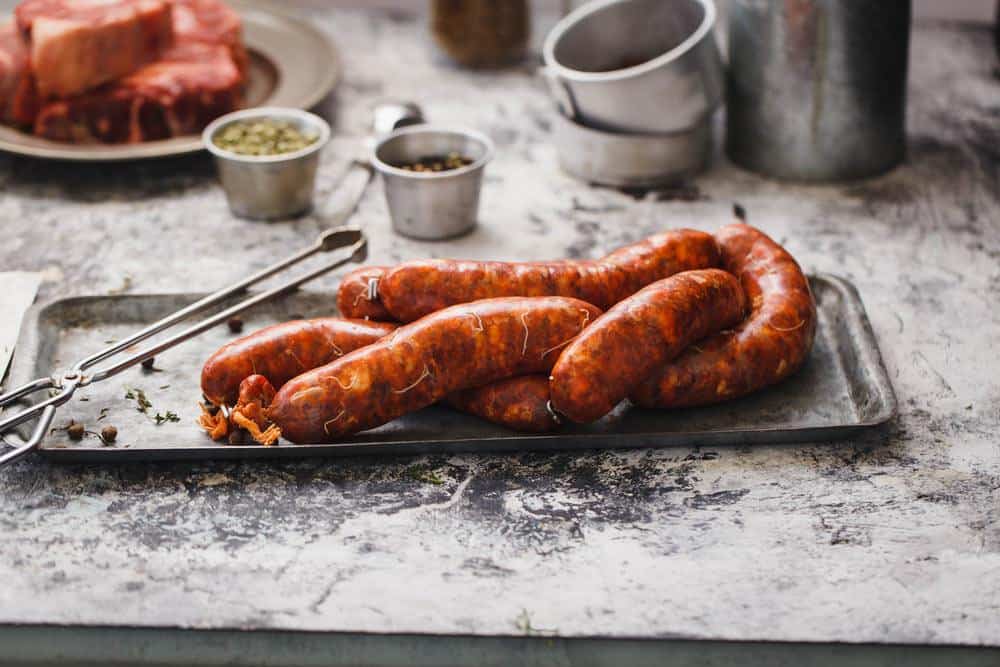 Over the centuries, the chorizo sausage went through many different shapes and forms. As we mentioned, long ago they didn’t even use the peppers which are now almost synonymous with them. Even more, differences cropped up when the sausage hopped over the Atlantic.

Mexico is now the second largest producer of chorizo after Spain, and if you’re buying it, it is likely it came from one of these two countries. But despite having the same name, chorizo sausages from Mexico are not much like those from Spain.

The main difference between these two types of chorizo sausage can be easily summed up like this – one is fresh, and the other is dry. However, there’s more to it than that.

The Mexican chorizo is mainly made from fresh, minced meat that is spiced with paprika and a variety of other spices that can vary. It is sold fresh, so you have to cook it before eating it or using it in most dishes. It can be in a casing or loose, and you can get dried variants though they are rare.

The meat used is most commonly pork though it can be beef or some other type of meat. It’s recognizable by its redness that comes from the spices used, but there is also green chorizo which uses green peppers for flavoring.

Spanish chorizo, on the other hand, is typically dried, smoke and cured before being put into a casing, so it can be eaten right after unpacking. There are chorizos which aren’t smoked though, and not all Spanish chorizos use hot peppers for flavoring – sweet varieties of the sausage are quite common.

It is also usually red and made from pork more often than not, though chopped pork and fat are used rather than minced pork. They can be eaten straight away, and you don’t even have to remove the casing since it’s usually natural and completely edible.

The difference in use and preparation is massive as is the difference in taste. Spanish chorizo offers much more variety, and you can find it in all kinds – soft or hard, long or short, sweet or spicy, you name it. Mexican chorizo, however, is more consistent and it is usually a spicy sausage with a strong, distinct flavor.

Mexican chorizo is more commonly found and used in the United States than the Spanish variety, though it is also not difficult to find. Just make sure not to confuse one with the other since that can ruin your meal.

How that you know the difference, we can move on to the most important part – the cooking of a chorizo sausage. 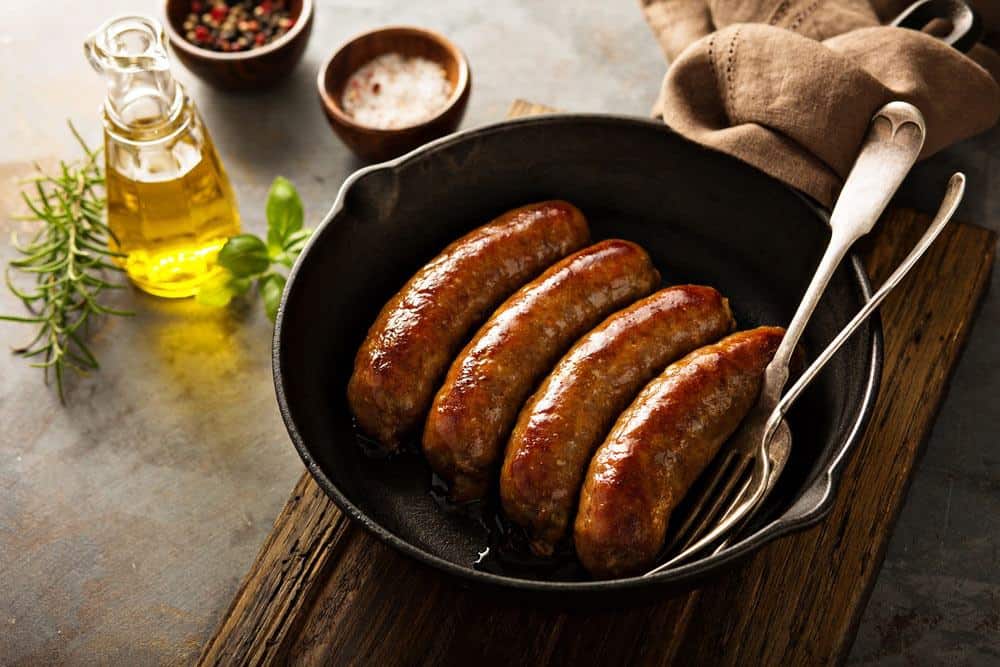 For this, we will be using the Mexican chorizo since it is the one that needs cooking before eating. Now, there are many different ways to cook chorizo, and we will describe a few here, starting with cooking in a skillet.

To start with, you will need the following ingredients:

Start by spraying the skillet with the spray, then place it on the stove and put the chorizo in it before turning on the stove to medium-high. You can heat the skillet up first and then add the chorizo, but then you risk burning them. You should cook them for around five minutes and turn them frequently.

Once they’re sufficiently browned, you can add some water and turn the heat down to medium-low. Now cover the skillet and let it simmer for around 10 to 15 minutes. Well-cooked chorizo should be completely brown, even on the inside. You’re done!

You can also broil the chorizos if you have a broiler. For that, you need to set it on high and wait for around 5 to 10 minutes until it’s hot enough. Then, place the chorizo on the broiler pan and leave plenty of space between them. If you do not have a broiler pan, a baking pan lined with aluminum foil will suffice.

After that, put the pan in the broiler oven and position it around 7 to 9 inches below the top heater. Then leave it to broil for around 10 to 12 minutes until the internal temperature of the sausage is around 160 degrees Fahrenheit. You should turn them every 3 or 4 minutes.

There you have it! Now the Mexican chorizo is ready for use in almost any recipe you might have on your mind.

Now that you know what the chorizo is and how to cook it you can use it in a ton of different recipes. You can serve it with fried eggs, use it in a bean stew, put it in a soup, use it as a pizza topping and so much more.

There are tons of great recipes out there just waiting for you to discover them and any of the dishes you usually make could benefit greatly from come chorizo in them. We hope you have a great time experimenting! Please share your favorite recipes in the comments and share this article around if it was helpful.

How to Make an Amazing Creme De Cassis Cocktails Without a Mixer
Next Post: 10 Creme De Menthe Drinks That Will Impress You