You are here: Home / How To / Here’s How To Make Chicharrones – The Best Way

Chicharrones are puffy and crunchy pieces of deep-fried pig skin, and they are delicious. You have probably eaten them before, but we bet you don’t know how to make them, right? There are lots of ways to make pork crackling and much debate of what is the proper way. We’ll share our way of making them with you and hope you won’t be disappointed.

Most Americans think only to turn a pork belly into bacon, but in many cuisines around the world, the belly is stewed, barbecued, roasted, or in our case, turned into crispy and golden crackling bits. Depending on the country, chicharron can mean anything from fried pork skin with little meat attached to fried pork rinds using only the skin.

Deep-Fry The Belly In Its Fat 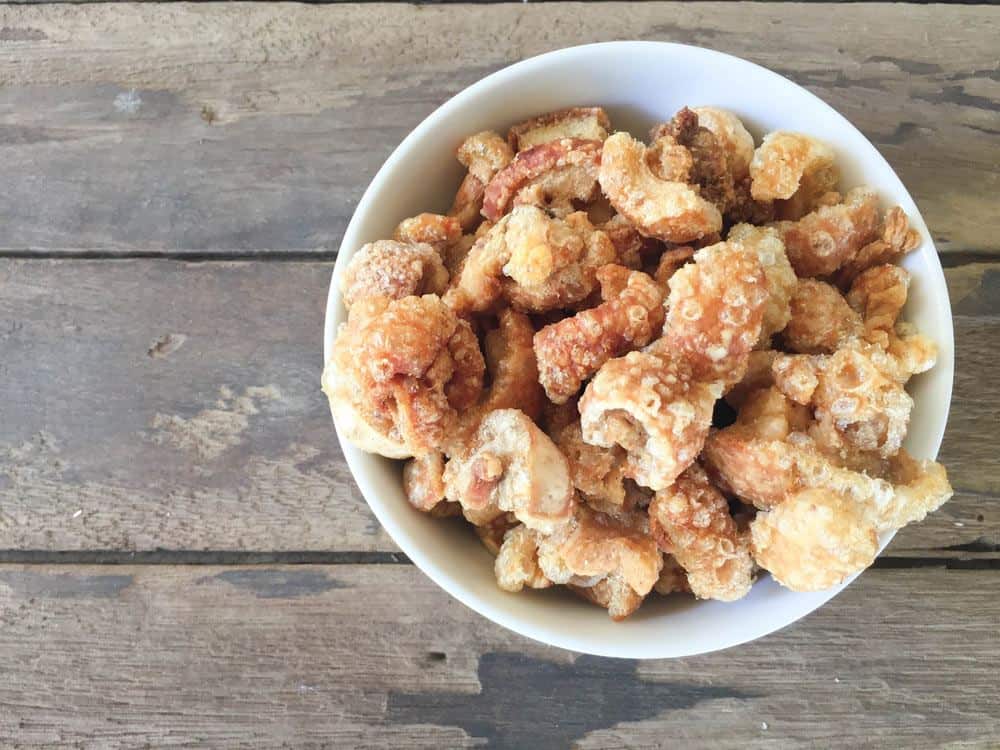 This is a Colombian technique, and the method seems so good to be true.

1. First, place segments of pork belly into a wok with a bit of water
2. Set it over on the stove
3. Let the fat render out over a few hours
4. Turn up the heat towards the end, thereby using the fat in work to fry the belly deeply

It’s not common to prepare chicharrones in such a manner.

Not only does the Colombian method eliminate the need for additional oil for frying the belly, but it is also extraordinary simple. Rendering lard for confit employs precisely this process. Through slow and low heat the fat that is rendered from the belly replaces the water in which the belly first stews. Only the liquid fat remains towards the end, providing the requisite amount of cooking fuel for frying the nuggets in the belly.

Now, it is time for baking soda. You should rub the skins of the belly with it, as done in Colombia before cooking chicharrones. The process of crisping and browning occurs because of three factors: 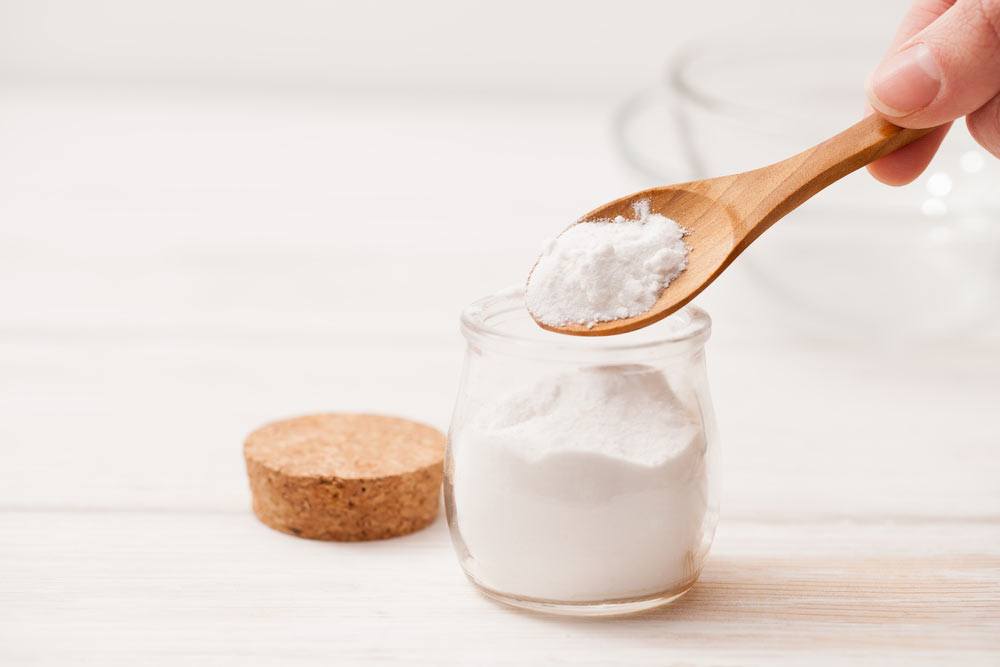 ● The breakdown of skin’s protein matrix from long and leathery sheet to the short, crisp bits
● Dehydration
● The browning which is known as the Maillard reaction

Baking soda intensifies all three of these effects. First of all, Maillard browning reaction occurs more efficiently in alkaline environments. Rubbed down with baking soda, the skins browns, and crisps faster than it would otherwise. This kind of situations also encourage the dehydration of the protein matrix in the skin, as the drier skin crisps more quickly and bubbles less vigorously while you fry.

Finally, the baking powder reacts with the skin’s proteins and helps them break down more easily when you cook the meat the next day. An overnight and uncovered rest in the fridge is probably the best way to go before cooking as it will give the soda plenty of time to react with the skin and allow the belly to dehydrate significantly.

Is there a better activity for an afternoon than to watch the nuggets fry in the wok? The process is a comfortable one and requires more patience than skill. Once you cut the belly into squares of snack-appropriate size, there isn’t much else to be done in the kitchen either. After a few hours, when all the water evaporates, and only lard remained in the wok, crank the heat and watch the nuggets deep-fry in their fat.

A more straightforward method can make use of an initial frying at a lower temperature with a final frying in boiling oil, the process not only requires quarts of additional oil but it also tends to produce harder-textured meat.

Even a flawless execution may not yield the tender meat of the Colombian technique. If your nuggets of pork belly were chewy or tough, it is a common problem if the oil is too hot, In a short and hot cooking period, the belly does not have enough time to break down the skin before the whole section starts to burn.

The Colombian method is a combination of confiting, stewing, and deep frying, all of which done in lard. With it, your meat will be sweet and solid, with just a small burst of porky juice flowing from each bite. Yummy!

● One pound pork belly, skin side rubbed with one teaspoon salt and two teaspoons baking soda
● Salt and pepper to taste
● Water to cover
● Spices of your choice such as paprika, sugar or cayenne 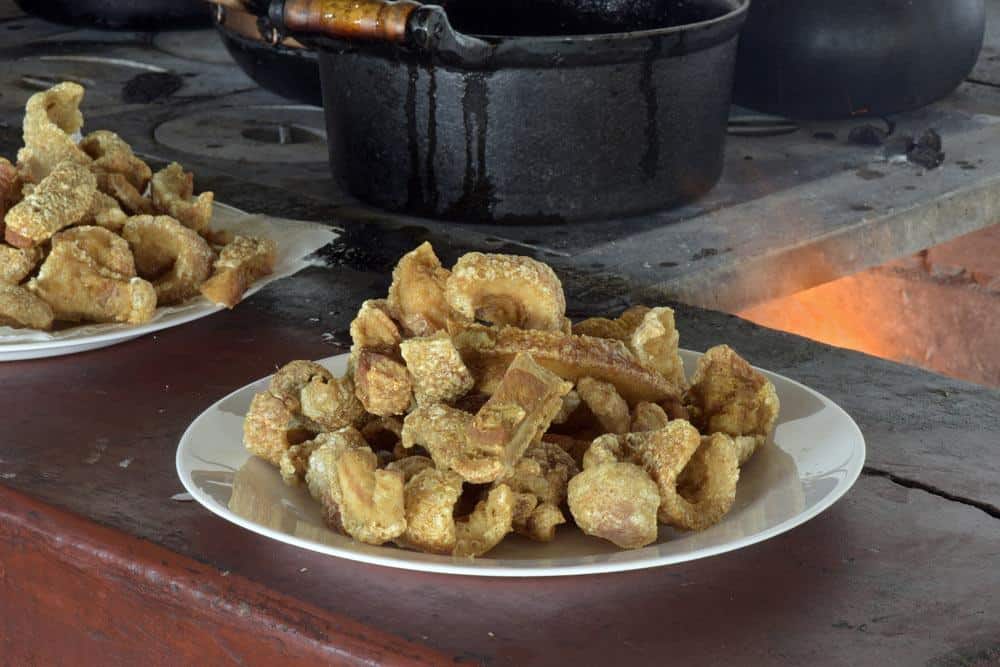 1. To prepare the belly, you rub the baking soda and salt all over the surface of the skin. Take care to distribute the powder evenly. After that set the belly on a rack and place it uncovered in the refrigerator preferably overnight and for up to a day.

2. Rinse the pork belly in the cold water and pat dry the next day. Cut into one-inch segments, about 1/3- inch thick. Place all the segments into a wok and add enough water to cover the meat.

3. Turn the heat to low and over the course of two to four hours, depending on the content of moisture of your pork, slowly render the fat from the belly. Make sure to turn the segments of meat every half hour or so. Keep the heat on low. At the beginning the water with look like pork stock but over time it will cook of, leaving only the lard in the pan.

4. When the only liquid fat remains in the wok, turn the heat to high and monitor the pieces of the belly as they deep-fry in the lard. That is the last stage of deep frying, and it should take about three to five minutes. Use a slotted spoon to transfer the chicharrones to a plate lined with paper towels to blot the extra fat. Toss with salt and the seasonings of your choice. The chicharrones will remain crispy for many hours.

There you have it, the best way to make chicharrones. As you can see, it’s quite straightforward and easy to make, so hit the kitchen and make it happen!
Let us know how your chicharrones turned out! And don’t forget to share the article with your friends!

A Vegan Twist: Vegan Butternut Squash Lasagna
Next Post: How To Cook German Sausage For The Best Results