You are here: Home / How To / How To Cook German Sausage For The Best Results

Italians have pasta, Japanese have sushi and Germans have sausages as the source of their national pride. These delicious filling and often sinful meat products come in numerous sizes and compositions, all typical for a certain area in Germany. The cooking methods can also vary, ranging from grilling to oven baking.

With this plentitude of choices, it is difficult to know how to get the best results when cooking German sausage. Don’t worry about that, though; we’ll give you a detailed guide to the types of sausages and the most successful ways of cooking, so keep on reading. 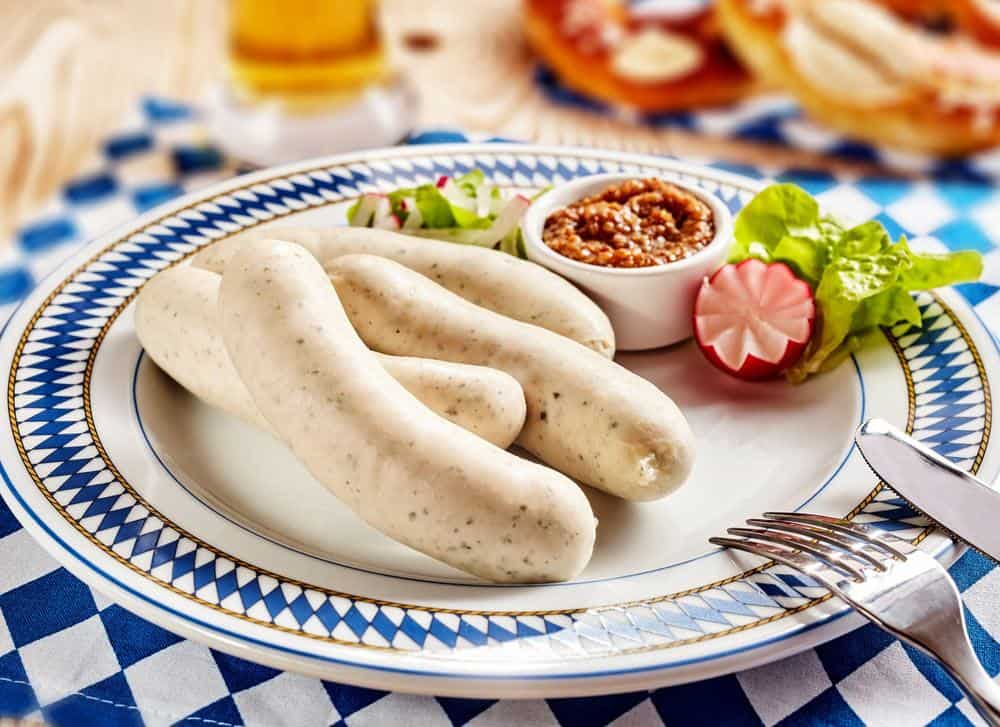 As we mentioned, there are plenty of types of German sausages, but here we’ll present you only with a couple of the most famous ones that can be acquired in grocery stores across the globe:

● Bratwurst is the most legendary German sausage, and it is made of finely minced beef and pork. It is usually grilled and served with bread and mustard, but it can also be slathered in a ketchup-curry sauce and served as currywurst.

● Thüringer Rostbratwurst is similar like bratwurst, but it is seasoned with caraway, marjoram, and garlic and formed using casings from pig intestines. Just as the previous mention, these sausages are most frequently grilled.

● Nürnberger Rostbratwurst is a type of bratwurst that is flavored with additional seasonings. It also differs in size since it is served pinkie-finger-sized. One serving usually includes six sausages combined with sauerkraut and potatoes.

● Blutwurst or blood sausage is made of congealed cow or pig blood and fillers such as meat, bread, oatmeal or fat. It is eaten cold and sliced on a piece of bread.

● Weiβwurst or white sausage is a traditional food in the south of Germany, and it is made of veal, bacon, and seasonings (onion, lemon, parsley, and cardamom). Traditionally, it is boiled and eaten without the skin. It is usually served with soft pretzels, mustard, and beer.

While there are some traditional ways of preparing each kind of German sausage, there is no law prohibiting you from experimenting with, let’s say, boiling the bratwurst sausage instead of grilling it. The most important thing is to cook it properly and evenly, regardless of the method. So, let’s go through some of the most popular cooking methods, and you can choose your favorite.

How To Boil German Sausage? 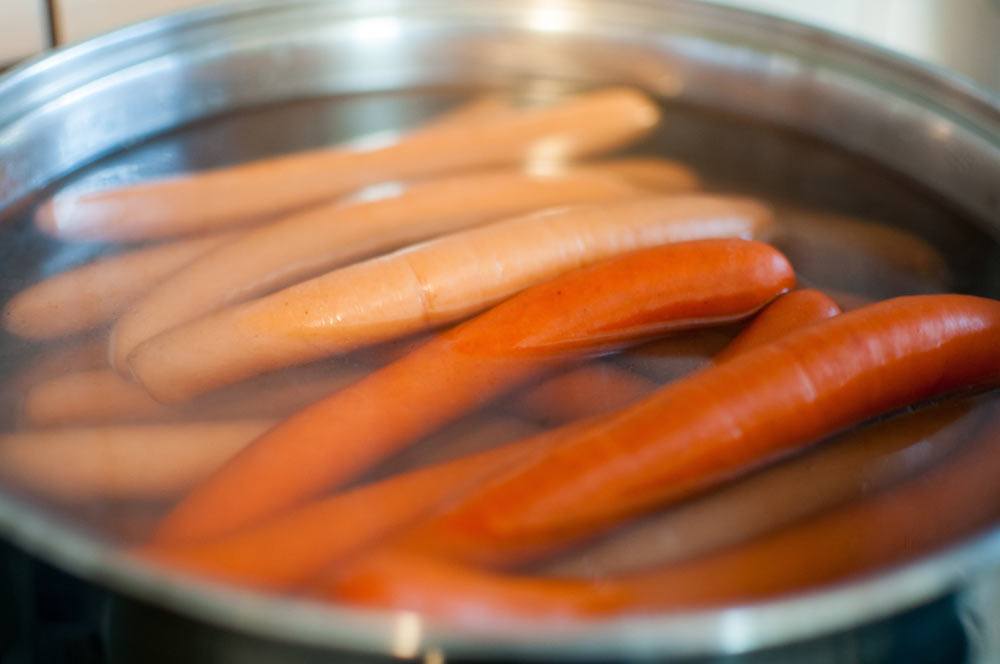 1. Put the sausages in the pan or pot, but don’t let them overlap. The more room between the sausages, the better they will cook.
2. Pour enough water to cover the sausages.
3. You can add half water, half beer for a more authentic German feel.
4. Leave to boil for about 20 minutes. Gentle lower temperatures result in better quality of the dish.
5. If you bought pre-cooked sausages, just boil them enough for them to be hot.
6. If you want a soft inside and crispy outside of the sausages, you can throw them on a grill pan after they’re cooked through.
7. Grilling the sausages for five to ten minutes (depending on your taste) will be enough. When the sausages are browned on the grill, they are done.
8. You can even try a reversed process and grill them for ten minutes and then boil them for 20 more minutes.
9. To make sure the sausages are really done, you should check their internal temperature with a meat thermometer. The temperature should be about 160 °F (71 °C).

How To Poach The German Sausage In Beer?

As we’ve already stated, German sausage is the best when combined with beer, so why not try to poach it in beer? It results in amazing juiciness and a flavor that can’t be compared to anything other. For this process, you will need to assemble the following ingredients: bratwurst (or another type of German sausage), six ounces of dark beer and one white onion. Here’s what you’ll need to do:

1. Chop the onion into rings to make a nice spicy companion to sausage when cooked.
2. Melt a small piece of butter (enough to cover the entire bottom of the pan) in a heavy skillet over a medium-high heat.
3. Add the chopped onion and let them brown on the melted butter.
4. Add the sausage to the skillet. Cook two minutes on both side until it’s nice and brown.
5. Slowly pour all six ounces of beer into the pan. Cover it with a lid and turn down the burner to medium-low. Let it cook for about fifteen minutes.
6. Finish the sausages on a grill pan (five to seven minutes) to give them the nice crispy edge.
7. Serve on a plate together with the onion.

How To Grill German Sausage? 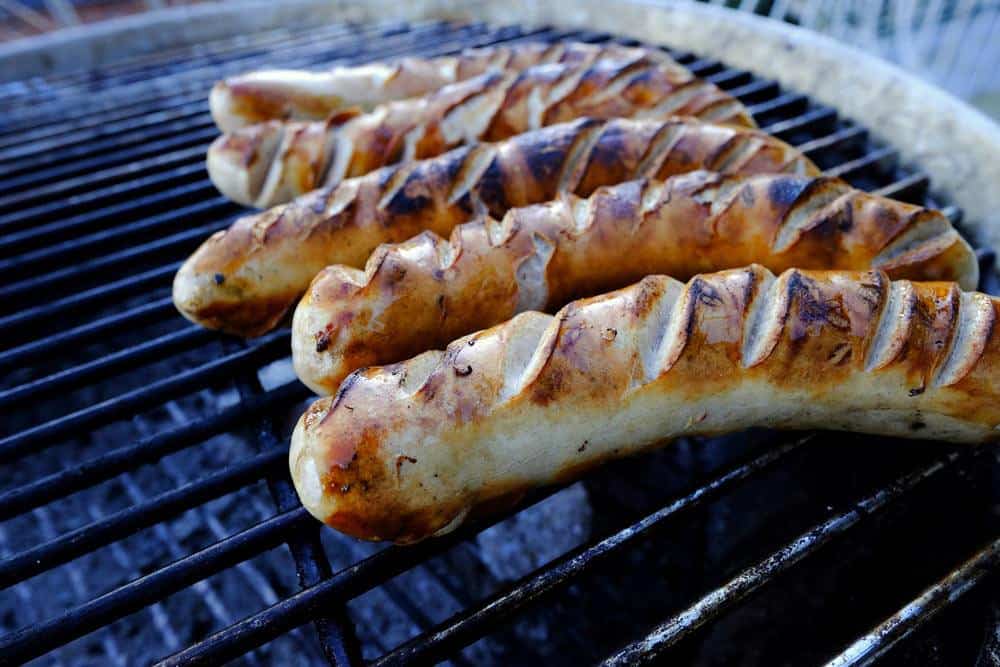 As you’ve seen, both of the previous steps involve grilling as a part of the cooking process, not as the main method. Now, you will see the seemingly simplest, but also tricky way of cooking these sausages:

1. Heat up some oil on the grill pan. Put the sausages to grill over medium-low heat to avoid them cracking open while remaining raw in the middle.

2. Don’t go with too low heat either because the interior meat can get overcooked.

3. There is too much at stake when it comes to grilling sausages this way, so we recommend poaching them first. You can do that by putting them in a disposable aluminum pan along with chopped onions and vegetables, pouring some dark beer on top of them and simmer on the grill pan for about 15 minutes. If you put them on the grill afterward, the taste will be beautiful, and they will be evenly cooked through. It will be enough to grill them for about three minutes on each side.

How To Bake German Sausage In The Oven?

Oven baking is pretty simple. All you need to do is:

There are plenty of other ways to cook German sausages to perfection. You can also broil them in the oven or smoke them (which is a far more complicated process), but these were some of the best. If you don’t believe us, try them out. Regardless of the method, you choose bratwurst is best when served with homemade bread or bun, sauerkraut, mashed potatoes and other vegetables. Enjoy.

Here’s How To Make Chicharrones – The Best Way
Next Post: How To Cook Omaha Steaks Meatballs To Perfection